I coveted a set of these Crate & Barrel mirrors for ages. Based on the price and my desire to buy at least three, I hunted high and low for a cheaper substitute to no avail. 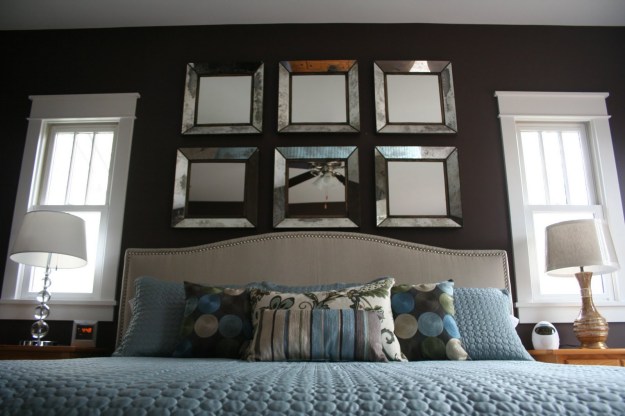 Eventually I bought three, thinking I’d trade up to six or even nine over time.

When I got them home and opened the boxes, I was shocked to see that two of the three had just holes for hanging whereas the third had what appeared to be half of a hanging contraption.

After returning one of the three mirrors to at least start with three somewhat alike mirrors, I bought picture wire and attempted to thread it through the holes. It was an exercise in futility. Plus, I realized there would be no way to hide the wire based on placement of the holes.

I did lots of head scratching and ultimately turned to Google. Unfortunately I didn’t find tips or tricks; only validation that my experience was the norm.

I dove in, buying several varieties of picture hangers plus various sizes of nails. Alas, most picture hangers you’ll find at the hardware store just don’t suit these mirrors. Two of my three are hanging in my living room and both refuse my entreaties to hang flush with the wall.

Oh, and because the mirrors are inconsistent with regard to size too, hanging them in a perfect line is pretty much Not Going To Happen.

My broken spirit refused to try to hang the third this weekend. It stares at me from my living room rug.

I wonder if I would have bought the mirrors had I known how hard they are to hang. Probably – I’m stubborn. But let me save you the trouble:

Find another mirror. Just trust me.

Try harder than I did to fall in love with another mirror.

If you’re really stubborn, keep an eye on CraigsList Brooklyn for when I give up and sell my mirrors for a loss.

5 thoughts on “The evil Crate and Barrel Dubois mirror”