You have to read this essay even though it might leave you hurting. I can’t stop thinking about it.

Via The Rumpus “What He Took” by Kelly Grey Carlisle.

Sometimes I imagine my mother in the months before her death. I imagine, for instance, that it was raining when she finally went to the clinic. This is implausible, of course, because she probably went in May or June, months when it doesn’t rain in L.A. But I like the rain, and I like to think she did too, and so I make it rain as she waited at the bus stop. It was 1976 and so I imagine Chevettes and Galaxies driving by on the busy street in front of her, their tires kicking up a fine mist. Her jeans were probably too long for her, as mine are. Their hems were frayed and wet. Perhaps she leaned back against the smoky translucent plastic of the shelter, then touched her stomach. Just a faint, quick touch, as if she were checking to make sure her top button was fastened, but it wasn’t that. She hadn’t fastened that button for weeks.

The power of imagination: filling in the blanks of a story she may never otherwise know, all the way down to the tattered, damp hem of her late mother’s jeans. 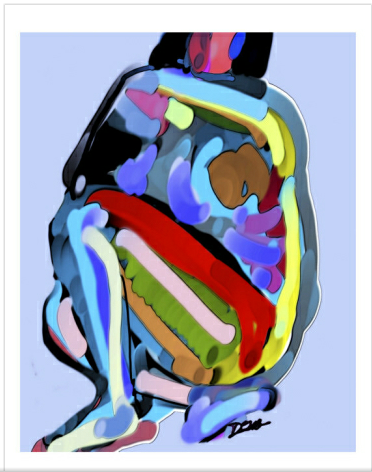 Via Art.com and Diana Ong

I also love the way this powerful essay unfolds. She starts with the image of herself as a new mother, nursing her baby girl, while her husband steals away for what may be one last night of uninterrupted sleep for a while. But then details are revealed. The author’s mother is dead and before that, at loose ends.

The author has me thinking about the families that bring us into the world and what makes us who we are.

Read something that moved you? Let me know in the comments so I can read it too.