I’m assuming the world has tuned into Shiba Inu Puppy Cam at some point, but just in case you haven’t please click here N-O-W.

I have watched Puppy Cam far more than I should tell you, but at least I’m learning stuff.

First, puppies are often more entertaining than anything on TV, even when sleeping 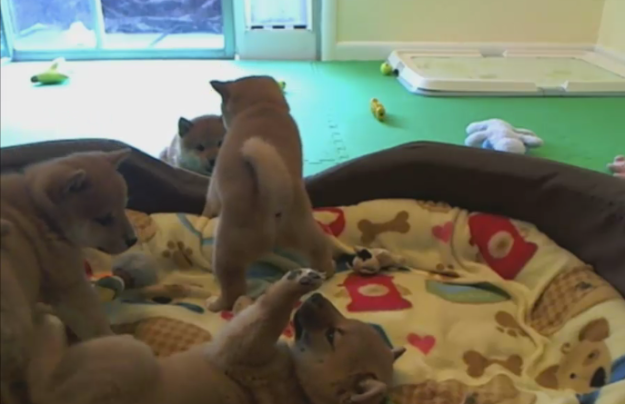 Sorry, there’s puppy butt in ever screen shot I have taken

Also, I want a puppy

I don’t want a puppy

Puppies lick their brother and sisters EVERYWHERE to the extent that I have had to look away.

Watching puppies is relaxing, except when they wrestle which is 90% of the time now. Perhaps tropical fish would be more relaxing.

Puppies bite each other everywhere. EVERYWHERE. I’m concerned that one of the boys has been circumcised.

When humans enter the room, everything else becomes less interesting to puppies. Puppies love their visiting humans.

Puppy insomnia doesn’t exist. I have watched these pups fall asleep in a split-second in the middle of doing whatever. It’s cutest when they sleep on their backs and have puppy dreams that make their paws flap.

The puppies have names. You can read them here under Fourth Litter.

Back to Puppy Cam.