My thoughts on fashion don’t go too far beyond Like, Love, Want or Ugh. As a result, I asked my friend, photographer Meg Urbani, to give me her take on this year’s Met Gala.

Thankfully for all involved, she has a far more sophisticated view of this sort of thing.

When my good friend asked me to write a guest blog post and suggested the Met Gala, I thought my post was going to consist of me banging my head against my desk because yet again people didn’t get what the Met Gala was all about, and wouldn’t get the daring fashion looks.

To my surprise, the masses including Twitter totally got what it was all about, but the people in attendance did not.

When I first heard that the theme for this year’s Met Gala was PUNK I was thrilled! When I was younger I thought of myself as punk: I listened to punk nonstop, I wore plaid, spikes, docs & chucks, had every hair color you could think of, hung out in a garage drumming for my band, and went to punk shows. To say I was pumped for the theme Anna Wintour announced for this year would be quite the understatement.

Reviewing the looks, though, I was beyond underwhelmed.

The possibilities with this year’s theme were endless Plaid, spikes, leather, Dr. Martens. Hell, I would even take duct tape.

But it appeared that 90% of attendees didn’t get the memo that PUNK was the theme. Even Anna Wintour herself didn’t embrace it. I understand that it’s risky to step away from pretty gowns, but that is what the Oscars are for. This is one event where you can wear things that are normally reserved for fashion editorials or on the runway. The Met Gala is the night to push fashion limits.

Many people looked good for all intents and purposes, but that is not what it’s all about.

Burberry were two of my favorites of the night. Both Cara Delevingne & Sienna Miller rocked it out in studded pieces. The looks are both feminine yet still have the punk edge. 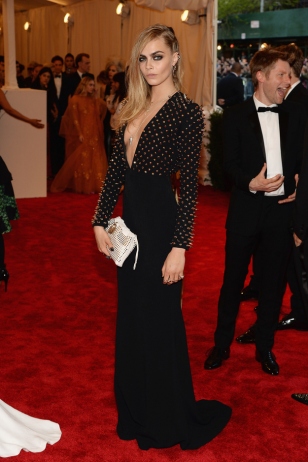 Gavin Rossdale and Gwen Stefani looked like King & Queen of the Punk Prom–I mean that in the best of ways! Gwen wore a Maison Martin Margiela cut­out gown & Gavin was wearing what I was hoping to see at the Gala: a plaid suit.

Coco Rocha rocked a dress by Emanuel Ungaro with some amazing boots. 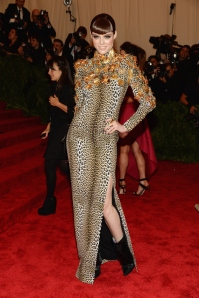 Sarah Jessica Parker did not disappoint in a Philip Treacy headpiece, Giles Deacon gown and velvet, thigh-­high boots by Louis Vuitton. Look at that faux­hawk!

I have to hand it to Jessica Biel in Giambattista Valli. I think many punk girls would have loved a dress like this. It’s a great example of fashion with an edge! 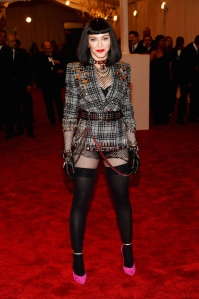 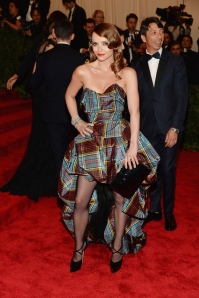 Some of the designers themselves went all out with the Punk theme.

There were a few celebrities whose looks I liked but which weren’t Punk.

Kristen Stewart is a favorite of mine. She arrived both with and wearing Stella McCartney. It’s not my favorite look I have seen on her, but I thought she looked beautiful, exuding confidence.

In my opinion Kristen was a perfect match for the Punk theme, but the look really fell short for me.

I have become quite the fan of Rita Ora’s red carpet looks, having had the pleasure of working with her stylist Jason Rembert when we were both starting out. I am thrilled to see him doing great things–which he is definitely doing with Miss Ora.

Katy Perry in Dolce & Gabbana left me confused. Here is someone who could have taken the punk theme to the next level, but I still am not really sure what happened here. It’s not punk though.

My worst of the night?

There may be a special place in hell for me for talking badly of a pregnant woman, but I wonder: was Anna Wintour playing a prank on Kim Kardashian? It’s well-known that Anna does not like Kim. Anna was once quoted as saying that Kim was “worse than socks with sandals.”

Kim wore Tisci for Givenchy, and it didn’t do her any favors. Just because you are pregnant doesn’t mean you have to cover up from head to toe, especially not in floral.

Here’s to hoping the stars bring it next year!

Note: all photos are via BuzzFeed. I don’t own any of them.