I’m afraid to jinx myself. It has only been once and heaven knows I have been disappointed so many times.

I resorted to ordering from Benares, which delivers to my Manhattan office, and taking that home for dinner via bus and then subway. Yeah, I know.

Could it be that there is a new, good Indian restaurant in Williamsburg, Brooklyn?

I dare. Because the meal I had delivered from Mahal Kita via Seamless was DELICIOUS. Even better? It was 20% off because they’re new in town. 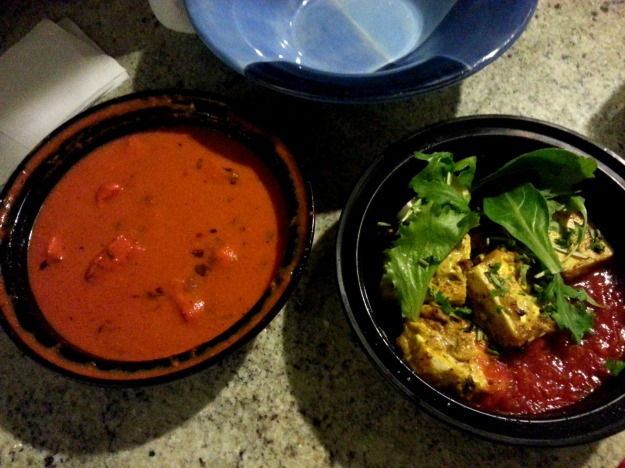 When I try a new-to-me Indian restaurant, I stick to the common dishes like chicken tikka masala or makhani and daal and naan. Maybe some samosas or seekh kebab in case the main course is inedible. No regional specialties. Nothing that makes me wonder “ooh, what’s that?”

Best case scenario, $30-35 yields three meals from one order. Worst case, I’m disgusted by what arrives, throw it all away and have a bowl of cereal.

I was concerned by the speed with which the food arrived, thinking that maybe it was pulled from a buffet. That would be terrible. No exaggeration, the food showed up fifteen minutes after I placed the order. The restaurant is close but…

When I opened the bag, I was overwhelmed by the aroma. A good aroma. The food smelled like Indian meals I have enjoyed in the past. I started to feel excited as well as hunger.

When I took off the lids, I was thrilled. No gloss of oil across the curries. Fresh cilantro sprinkled on the paneer. OK now.

When I tasted the food, I almost cried happy tears. Yes, seriously. I tried to hold myself back, but it was pointless. I was sold after just one bite.

Please let the second time I order from Mahal Kita be as good as the first. Please. I want to try everything.

Update: Order #2 was just as awesome.