Apparently you want to hear more about Kenya. How cool!

This post will help put part of our activities into perspective.

Fly from JFK to Dubai (approximately twelve hours) via Emirates. Most of us thought the long flight was painless, I think. It helped that the flight wasn’t full. Julie and I had an empty middle seat between us.

I read, watched three movies, checked out the plane-mounted cameras and slept a little. Oh, and we drank wine.

During a three-hour layover, we visited the last Starbucks we’ll encounter, and the Heineken bar. In spite of it being 8:30 am local time.

From Dubai, we had another flight – approximately four hours – to Nairobi. Upon arrival, we secured our visas, picked up bags and then were met by the wonderful Mercy (who works with Rotary) and her sister, the equally lovely Rose.

It didn’t take us Kenya rookies long to realize that Mercy, in addition to being tremendously smart and helpful, also has the best laugh we’ve ever heard.

A bus took us to LaMada Hotel. After a short, much-needed nap (and an even more needed shower), we had dinner as a group and then crashed hard.

After breakfast, we got in our vans and drove to the Giraffe Center in a Nairobi suburb.

And then Sheldrike’s Elephant Orphanage.

After these stops, we embarked upon what was an unofficial safari of sorts: the five-ish hour drive from Nairobi to Maasai Mara. We stopped at a scenic overlook upon entering Great Rift Valley.

From there, the roads became more of a vague concept than a paved, tangible thing. We Americans adjusted (and fortunately the co-leader of the trip was a chiropractor).

After getting used to seeing all sorts of wildlife, livestock, Maasai people and their small villages, we finally arrived at Siana Springs Tent Camp.

We settled in and received a primer on the importance of securing your tent at all times (you do not want a vervet monkey party inside, trust). At 6 pm, we regrouped in the lounge for what would become our daily volunteer meeting before dining at 7:30 pm. Soon afterward, I headed to the tent – by flashlight – to clean up, charge my phone while electricity was still available and get some rest before our first day at Nkenijii Primary School the next morning.

At 6 am, we got our wake-up call. At Siana Springs Tent Camp, that consists of a man standing outside your tent saying “Jambo!” (hello in Kiswahili) until you respond in kind. I found myself waking up strangely early – for me – I was usually awake before the call came.

By 7 am Monday and each day to follow, we met the rest of the group for breakfast before departing around 7:30 am for Nkenijii School in two vans.

I’m not sure about the distance to school in terms of miles or kilometers; only that the drive across the savanna took anywhere between 45 minutes and an hour and fifteen minutes. If I recall correctly, the first day’s trip was the longest and the bumpiest before our awesome drivers figured out a different route.

That being said, each drive had its tricky spots. Our old-looking Nissan vans, purchased used from Japan and reinforced for Kenyan terrain, were the unsung heroes of the trip.

Our arrival at school that first day was emotional. More on that another day.

Each day except Friday, we stayed at school until approximately noon. The hours at school were spent playing sports and games, creating art from available supplies, working in the makeshift clinic and building the kitchen for which we all (and some of you) raised funds.

After school, we returned to Siana Springs for lunch followed by free time. We could take a swim in the pool, get a massage or a drink in the bar, or take a nap. On days other than Monday and Friday, we had optional activities including nature walks, a night safari and a Maasai village tour.

Guess which I chose that first day? Yep, a nap and a shower.

Each day, we met as a group in the lounge at 6:00 pm to discuss the day’s events. Afterward, we had dinner at 7:30 pm. On some nights, we were treated to dance and singing performances by local Maasai and Guitar Man (who knew twelve songs total and played them in order nightly). The Maasai visitors would close by laying out handmade wares.

After dinner, I usually went to the tent to relax for a while – reading, charging my phone before the electricity was shut off for the night and laying out clothes for the next day. I think the latest I went to sleep all week was 11.

The first optional activity was a night safari.

To be honest, we didn’t see as many animals as we had hoped. There were a few – including a random aardvark and a hyena trying to eat a recently killed zebra – but no elephants or lions. Those came later.

But we had fun with our little van group and it wasn’t an expensive excursion. Oh! And there was hot chocolate. Remember that we were experiencing Kenyan winter.

The afternoon’s optional activity was a “short” (two hours!) nature walk with a Maasai naturalist. I was beat, and so were quite a few of the others. Napping and showering happened instead.

There was also an optional four-hour hike/climb. If you know anything about me, it will not surprise you that I opted out in an effort to avoid injury.

On Thursday afternoon, we made two special stops. First, we visited Empopongi Primary School which Kenwood Rotary supported for several years in the past. Then we went to the lovely home where Mercy, her husband and son live, Rotary House. These activities deserve a post of their own.

We spent a full day at Nkenijii, half of which was for volunteering and the other, for presentations from the students. This day deserves its own post.

In the evening, we had a Bush Dinner under the stars. It was a very cool experience.

For our final full day in the Mara, we went on an all-day safari to the Tanzania border and back. I’ll share more on that experience soon, but for now, here’s a sneak peek at the wildlife. 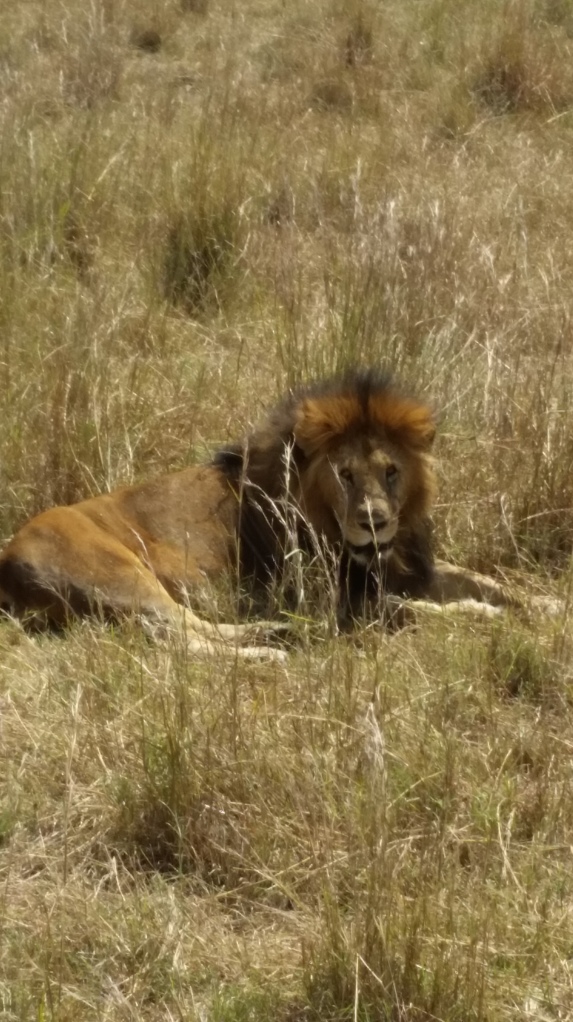 After our last group meeting and dinner, it was time to pack. We left our bigger luggage at the front desk, to be driven to Nairobi, whereas we were set to fly back on a tiny chartered plane, one small enough that bringing bags (beyond backpacks) was not an option.

Our group leader Kevin told us in advance “the flight leaves from Gate 17 at 9:00am, remember that number in case you get lost in the airport.  Be sure to write it down.”

The joke became evident upon arrival at the airstrip.

The little plane got the job done.

Upon landing in Nairobi, a bus picked us up and took us to Kazuri Beads, a woman’s empowerment project. I did a bit of shopping but did not pick up any “Yuppy Chockers.” Maybe next time.

Afterward, lovely Rose hosted us at her house for lunch. We got to meet some of her friends and learn about their lives in Nairobi. Very enjoyable.

And then it was time to head to the airport for our long flights home, complete with a three-hour layover in Dubai–which wouldn’t have been so painful if not for the fact that our flight to JFK left Dubai at almost 3 am. UGH.

Suddenly we were back in NYC. Was it all a dream?

Still reading? If so, you are the kindest person in the world.

3 thoughts on “More about Kenya: how we spent our days”