Someone asked me “why don’t you write recaps of The Bachelor and The Bachelorette when you’re such an avid viewer?” 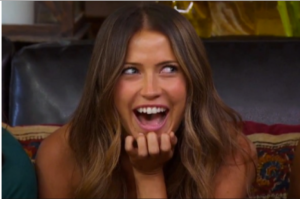 First (and foremost), I am a very, very lazy person. Believe me when I tell you that. I don’t presently have any plans to change that about myself. I’m comfortable in my sloth.

But another good reason for my disinterest in writing Bachelorette or Bachelor recaps is that there are some excellent ones out there. Here are a few of my faves.

I love Possessionista for taking on not only fashion but also the sex issue.

Yes, based on the previews, Kaitlyn has sex (just like the rest of us) and talks about it (and??). But what might be regrettable, is that Kaitlyn seems to slut shame…herself. No need girl, honestly. I understand that it might be hard to talk about your sex life on TV, but please try to block out those who are sending shade your way.

Fortunately, Kaitlyn seems to own her sexuality now. Maybe? More on this topic from Robyn Ross.

Here is Kaitlyn, The Bachelorette herself, talking about the experience for People Magazine.

Useful insight: Kaitlyn introduced me to a new phrase: Babe Sodas. Never heard that one. 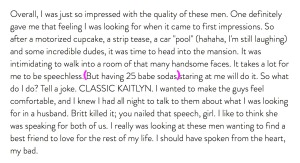 From Bachelor Expert (who you got to know here) and Mel Got Served, we have fun with screen caps. Also, I’m with Mel re: pitting two women against each other. Not cool.

Here, it’s a bunch of guys basically talking about which girl is hotter. The fact that some guys were baffled that they could change their vote based simply on having a conversation just showed everything wrong with this world. Wow, a girl could be more attractive besides face value – what a game changer! And while I don’t want Britt to be the lead, I also don’t want to see two women have to be pitted against each other and letting the men choose their fate. The fun of the spin-off was the power being in the woman’s hands (but let’s not get started on the whole end proposal nonsense). Either way, it’s all gross. It’s not what I wanted or fans, but it’s what the show claims is interesting.

I’m trying to decide if equality in the form of pitting two men against each other for next season would make me feel better or worse.

Will you be watching tonight?

I will be OBVIOUSLY. Even though I’m not thrilled about the return of Nick from Andi’s season, who was never my favorite.

3 thoughts on “This is not a recap of The Bachelorette”