It started off as many of my weekends begin: with a nap.

My company offers half days for Summer Fridays, bless them. This week kicked my a$$ and I needed to recharge.

On Saturday, I headed over to East River State Park for Renegade Craft Fair. Why? Because my Twitter friends Joel and Steffanie would be there with their business, Old Town Suds. 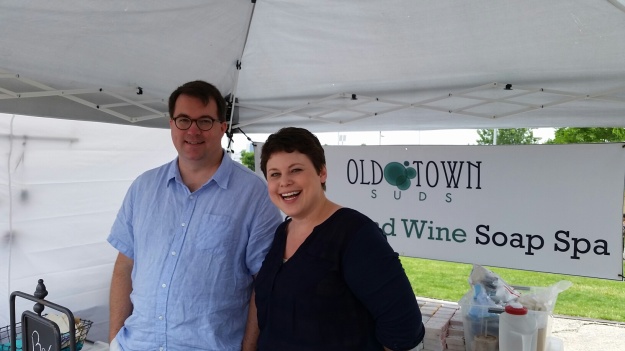 I love meeting Twitter friends! And yes, that is foreshadowing.

Subsequently I popped into the adjacent Smorgasburg for a bite to eat.

After walking the entire grounds, I chose a braised beef sandwich from Outer Borough with lots of cilantro (hold the cucumbers) on a scallion pancake.

With a dash of Sriracha, it was fantastic.

I have lots more to say about Smorgasborg but I’ll hold it for a dedicated post. Stand by.

Anyway, my weekend didn’t get crazy until Saturday night. @Full_of_Moxie (aka A) and I made plans for a late-ish dinner at a new restaurant in the West Village, Gardenia. Attractive spot. Great food and friendly service. We consumed various margaritas, sangrias and made-up-on-the-spot drinks conceived by our new bartender buddy Tony.

I even consumed a shot that included cucumber juice and survived.

A and I were not ready to call it a night so we walked onto Downing Street and discussed where to go next. Then we heard 90s hip hop, loud and clear. It was coming from behind this facade.

Photo via Project 365 by Andriy Prokopenko

But there were no doors. And dumbasses that we are, we even knocked. Fortunately we proceeded to walk around the corner where we found the entrance.

“What is this place??” A and I asked each other as we walked into Houston Hall, following the music. The bouncer didn’t card us – which should have been a sign.

A and I found a spot at the bar and ordered the world’s spiciest margarita (her) and the house lager in a magnificent stein (me). The DJ segued into Taylor Swift’s Shake it Off, causing every 22 year old in the beer hall to start shimmying feverishly. Next came Beyonce. Inexplicably, the youngs stopped dancing. A and I were appalled.

Not long after that, someone tapped A and me on our shoulders.

Turns out that she had tweeted that she spotted us, but for once, neither A nor I were on our phones.

While Houston Hall was fun (and has some very attractive bartenders), I don’t think I’ll become a regular there. Why? I must have been the oldest person there.

Case in point 1: I was asked to take a picture of a group of guys as they did Jager shots.

Case in point 2: the adorable young man I found myself talking to was all of twenty three years old.

Around 2 am, it was time for me to call it a night. And by “call it a night” I mean hop on Tinder for some foolish texting while eating leftovers from Chipotle.

How was your weekend?

1 thought on “My weekend in tweets, pics and gifs”