In sixth grade, I wanted nothing more than to dance with a guy named Kevin to “Careless Whisper.”

I made it happen too. 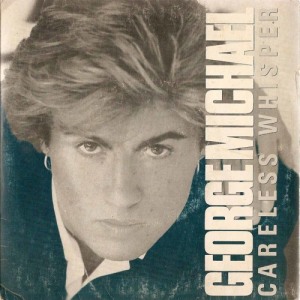 Eleven years old and small for my age, I didn’t show many signs of impending young womanhood yet.

While I insisted on wearing a bra, I absolutely did not need it: I was frustratingly flat-chested. My Barbies had finally, belatedly started collecting dust, but I was reluctant to allow Mom to give them away just yet. I liked boys (a lot) and especially Kevin, but the realm of romance was largely theoretical for me.

The denouement of any fantasies I had involved holding hands, kissing and being referred to as some guy’s girlfriend.

And then “Careless Whisper” was released, stirring something in me. It wasn’t the sinuous saxophone (too obvious). Credit George Michael himself (with apologies to poor Andrew). I liked his handsome face with its perfect scruff and his voice full of longing. I listened to “Careless Whisper” on repeat.

What’s remarkable to me about how I made my dance with Kevin to “Careless Whisper” happen was that the somewhat-magical, but ultimately unfulfilling moment took place not at a school dance, but at a CHURCH dance. As in, we were not just in the same place at the right time when the song just came on. No. I had to actually ask Kevin to go to this specific dance with me. I summoned up the courage, overcame my fear of rejection and did it.

In the interest of full disclosure, I was not even a religious kid. Week by week, I was doing what I could to extricate myself from Sunday school and church services. But when the dance was announced, I saw my opportunity and seized it.

Kevin, popular Kevin, accepted my invitation (BLESS HIM!). To this day, I am so grateful to him for not chickening out or for laughing at me for asking him to a dorky church thing. On the night of the dance, he showed up, dressed nice and seemingly OK about the prospect of being my date.

I can’t be sure if “Careless Whisper” was the last song played at the dance or if that is just time manipulating my memory like rushing water turns jagged rocks to smooth pebbles. No matter. It happened. We danced, and to my favorite song.

The dance was the pinnacle of that night–no magical kiss happened on the dance floor in spite of my awkward, prolonged, meaningful gazes into Kevin’s eyes. On some level, I remember feeling a bit let down. In retrospect, Kevin was probably just being a good guy who didn’t start making out with girls on makeshift church dance floors.

Thanks for the music, and the memories George Michael.