Dating while old is pretty terrible. When it happens at all!

Recently I met a man on a flight back from LA* and it was notable enough that I tweeted about it.

The strangest thing happened on my flight home: I had a handsome seatmate!!

Meeting new people and having the interest be mutual doesn’t happen for me as much as it used to.

If you met me when I was in my twenties, I probably would have tried to tell you dating was terrible then too. Fresh out of college and living in NYC, I seemed to meet guys who were either too serious OR the precursor to this. I craved something in between the dude who just wanted to hook up and the man who planned overly formal dinner dates that felt like something real grown-ups (i.e., not me) did. Given my relative immaturity, I was weirdly more comfortable making out in the corner of dark bars than straining to make conversation over dinner at Provence.

In retrospect, I don’t know how I managed to cram so many crushes, love interests, boyfriends and friends with benefits into the six years I dwelled in NYC the first time. I must have been exhausted.

In my thirties, between a long relationship, career stress and living in DC, there was a dramatic drop-off in dating opportunities. Why didn’t anyone warn me this would happen?! I probably would have ignore anyone who tried, and I was too dumb to come to that conclusion on my own. So if you’re young and no one has warned you, let this serve as my personal PSA to you.

Now, I recognize that I’m not OLD-old. But I’m also not really young, either. The only people who say “you’re still young!” to me are over seventy and/or have serious vision issues.

And the reality of not being young anymore is that a lot of those fun, carefree things have largely evaporated. I have fewer crushes and opportunities to feel excited about love interests. And that’s a big bummer.

One thing about Dating While Old that’s good is that you’re able to spot warning signs early–and ideally you’re mature enough to act accordingly. One of my recent crushes – gainfully employed, handsome, fun in an up-for-anything kind of way – revealed himself to be a guy who habitually talks over other people and is a terrible listener. He’s also a Bernie Bro.

A truly welcome aspect of Dating While Old is the fact that I can look at a guy, realize he’s wrong for me in some important way and walk away with minimal angst. After all, my life is great with or without a date. Thank goodness for loyal girlfriends and satisfying careers and less money concerns.

BTW, if you are a Smug Married tempted to ask “but what about the apps? Don’t they produce many more dating opportunities?” please read this New York Times piece by Taffy Brodesser-Akner immediately. 🍆🍆

*As always, it’s complicated. I’ll update you if it’s worth telling the story.

I have no idea what made me think of my first kiss recently, but now I can’t stop thinking about it. And not in a good way.

To set this up properly, here’s a picture of me from the First Kiss Era. 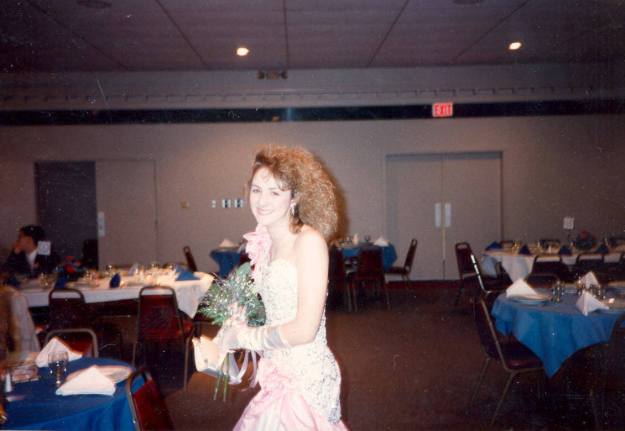 I’m pretty sure I was 14 when the kiss happened (although we all know my memory is Brian Williams-caliber terrible) and I think his name was Mike. We met at the mall where my friends and I would try on Z Cavaricci jeans, loiter and try to flirt with boys for hours. END_OF_DOCUMENT_TOKEN_TO_BE_REPLACED

Dan* and I met through my work-study job in college. My commitment to ten hours of weekly clerical work in the Registrar’s Office was the subject of much mirth among the full-timers and more reliable student works.

It was a 50/50 proposition if I would actually show up for my designated hours, they joked. “But I always call!” I would counter. Whether it was due to classwork, hangovers, my need for a nap or simply something more interesting arising, I called in with a lot of excuses.

For whatever reason, they tolerated me.

Dan appeared on one of the days late in my freshman year when I happened to show up. His mother was one of the bosses and when visiting from his own university, he would come to the office to help out. Dan was a volleyball-playing, ROTC-committed stud of a man. When he smiled, his eyes reminded me of Patrick Swayze (!). Tall and fit, solid, sturdy and friendly, I was immediately drawn to him. 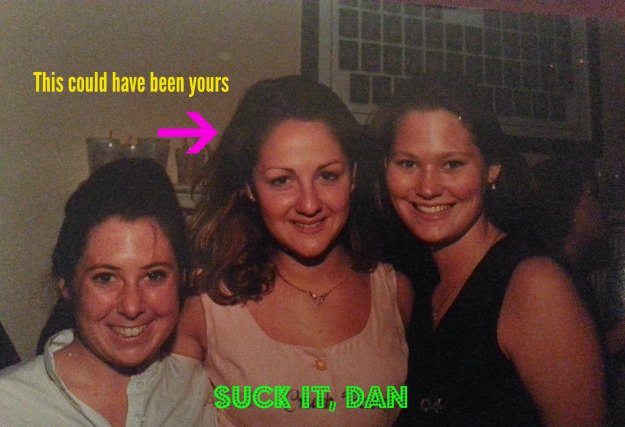 END_OF_DOCUMENT_TOKEN_TO_BE_REPLACED

I never craved marriage. As a kid, the marriages around me didn’t seem like something to hope for. To aspire to.

As I remember it, my parents fought (a lot).

END_OF_DOCUMENT_TOKEN_TO_BE_REPLACED

I blame Eliza for inspiring me to get on Tinder (not really). But it’s my own fault for sticking with it. I find the app so thoroughly entertaining.

OK, most of the time I don’t mean entertaining but horrifying (NSFW), but you get the idea. 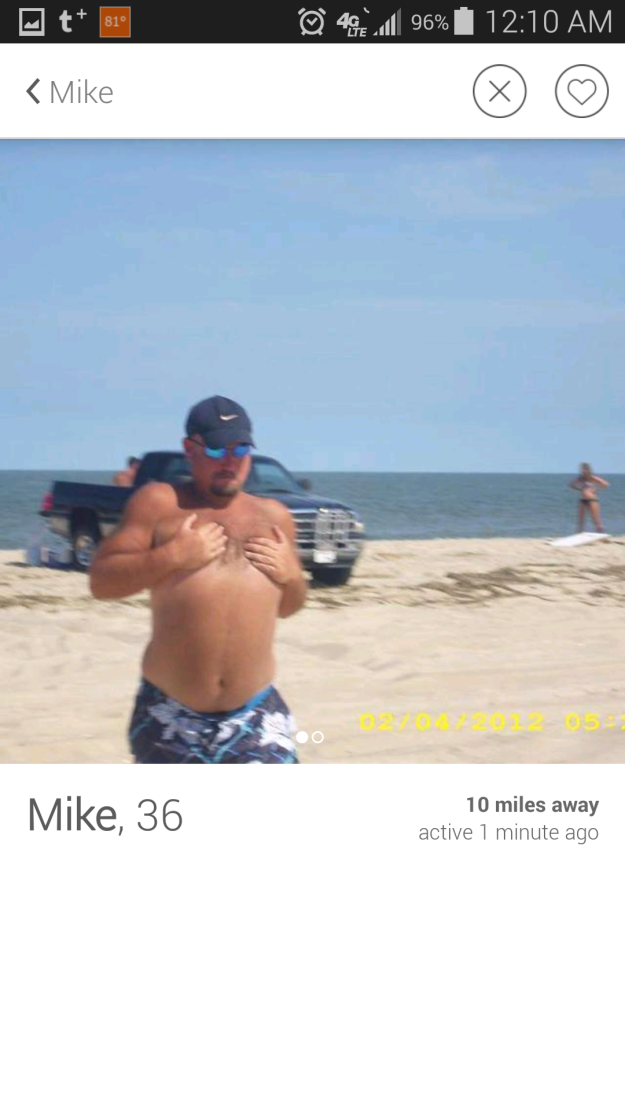 END_OF_DOCUMENT_TOKEN_TO_BE_REPLACED

First, a whiskey sour is a terrific summer cocktail. So is Bowery Hotel’s Luna de Fresa ideally made by Walter Easterbrook. 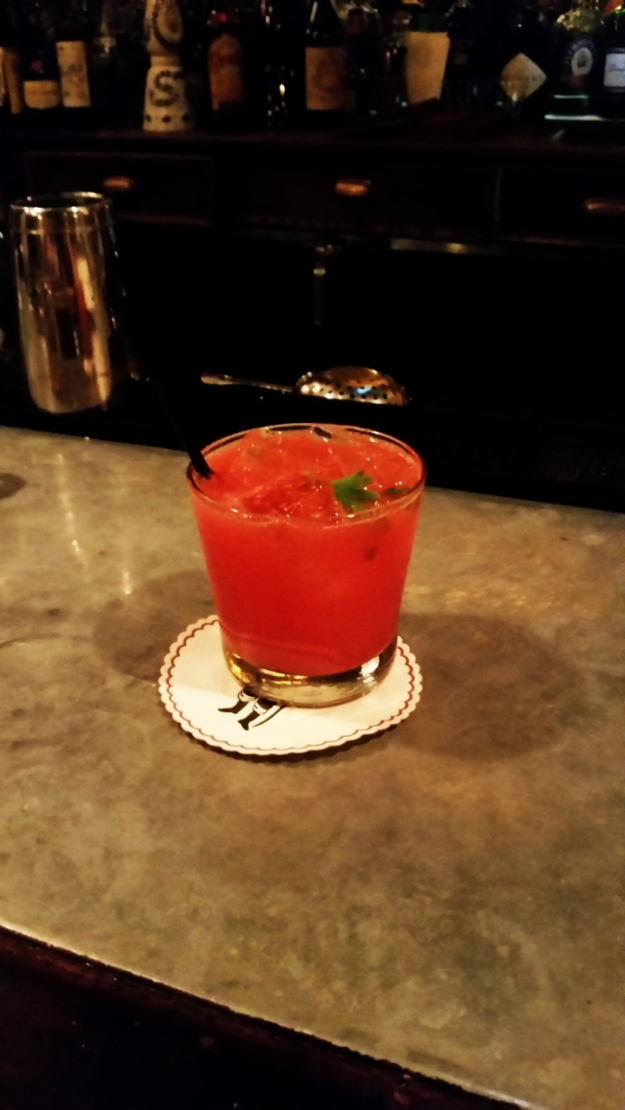 Next, a backhanded compliment is still a compliment.

As in “this is the best I’ve ever seen you look” and “you’ve lost a ton of weight” when said by a handsome, but socially awkward, man.

On the other hand, if my mother said either thing to me, I wouldn’t speak to her for a week.

Also, contrary to this article, fitness classes are not 50% easier the second time around.

Still, this notion got me in the door for Pure Barre class #2. Maybe the third time will be the charm. Hopefully. You know how I feel about classes.

I’m not the first person to say “no” to being a bridesmaid.

This $50 Banana Republic top has a bit of magic to it. I’m not surprised it’s mostly sold out in white.

What did you learn this weekend?

One of my recent favorites on Twitter is Aussa Lorens. Her blog is terrific – wild and entertaining. But also thought-provoking. Give this post a read for starters.