It’s only early December. If you’re a normal person – aka not me – you haven’t started stressing about making plans for New Year’s Eve.

But if you’re a weirdo like me, you want to lock it in. You don’t want to be left out, without something fun to do. Or maybe you just want to resist temptation to do nothing but watch New Year’s Rockin’ Eve from the comfort of your couch.

This is how I spent last New Year’s Eve with friends. Pretty swank, eh?

We had a dedicated server who made sure we always had cocktails and food from the various stations AND a butler–who was so young and handsome; I probably complimented him a bit too much, poor guy. END_OF_DOCUMENT_TOKEN_TO_BE_REPLACED

I found Bill right around the corner from where I was living.

Bill was on 20th Street near my first-ever grown-up apartment, a tiny studio on Park Avenue South in Gramercy Park. I was in a bad way and Bill took care of me. It was scary for me to trust again, but with time, I grew to give Bill carte blanche.

At least with my hair.

My hair adventure started just prior to graduating from Cornell.

END_OF_DOCUMENT_TOKEN_TO_BE_REPLACED

My roommate Katie recently spotted Brandon Stanton, creator of Humans of New York in Chelsea. I was excited for her, impressed that she spotted him and a little jealous to boot.

“Did you ever see the pics from the time you spotted the Humans of New York guy?” I asked my roommate Katie.

“I interrupted an awkward conversation,” she added. “Brandon was awesome and we hugged.”

A post shared by Humans of New York (@humansofny)

I love HONY, as it’s known, for its ability to remind me of the breadth of the human experience. And I’m not alone: HONY has 12.5 million Facebook fans, 2.7 million Instagram followers and two successful books (with another one on its way this fall).

But I do wish Katie had been able to meet Brandon on this day instead!

This adorable pic is the property of Humans of New York

I had just crossed 34th Street at Park Avenue en route to the subway. Something made me look back to the north side of the street. That’s when I saw her.

The woman was lying on the sidewalk, her body stiff and twitching. I ran back across the street. I don’t remember checking for traffic.

While another woman called 911, I dropped to the sidewalk next to the woman who was still seizing, her lips turning blue. END_OF_DOCUMENT_TOKEN_TO_BE_REPLACED

What came out of me felt like someone tried to funnel Niagara Falls through a coffee straw. I swear my sphincters were screaming. It felt like my delicate starfish was a gaping maw projectile vomiting a torrential flood of toxic waste. 100% liquid. Flammable liquid. NAPALM.

I laughed hard as Genevieve gave a dramatic reading of the terrible things that happen when one eats sugar-free Haribo gummy bears. I had heard about the reviews before, but hearing them read aloud in an Australian accent by the Ford Model my friend Annie and I had just met gave the content new life. Once every few minutes, Genevieve’s model friend Linde looked over from the adjacent banquette and mouthed “ARE YOU OK?” Genevieve sweetly and confidently waved her off. She appeared to be having fun with us mere mortals.

One of my main complaints about life in DC was that I didn’t get invited to many things. I wasn’t a lobbyist, an attorney or a GS-15. An invitation to a White House Correspondents’ Dinner after party was out of reach, forget the dinner itself. If I was very, very lucky, I would get to go to the soft opening of a restaurant and get to tell my friend, the owner, what worked and what didn’t. That was the extent of it.

After a fifteen mile commute home to DC from the office in Northern Virginia – that usually took more than an hour – I often went home, plopped on my couch and thought about my stalled social life. I didn’t have the energy to go out, but I also lacked opportunities. Part of me was withering away (unfortunately that part wasn’t my thighs or butt, but I digress).

The bright side is that if not for my uninspiring social life, I might not have a blog or several Twitter accounts. So there’s that.

But here in NYC, I usually feel like anything is possible and somehow, invitations are always coming my way.

Which is how I found myself last week, not a movie premiere. Not at a club opening. Not any of these things. But at the unveiling of a menu, Strip House‘s updated bar menu to be exact.

Know what? It was terrific, all of it. We ate potato truffle popovers and steakhouse bacon BLTs, and drank a stellar variation on an Old Fashioned.

There was a beautiful burlesque performer and an aerialist and a man juggling knives. 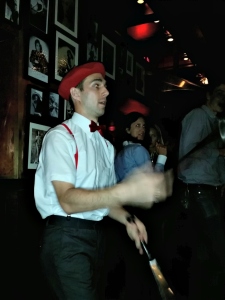 And in the midst of it all, there was me, sitting on a banquette while a model read me hilariously bad Amazon reviews for sugarless Haribo gummy bears. And I was loving my second chance at this NYC life.

You know I love this city, but as I have posted before, it can be awful in the rain. 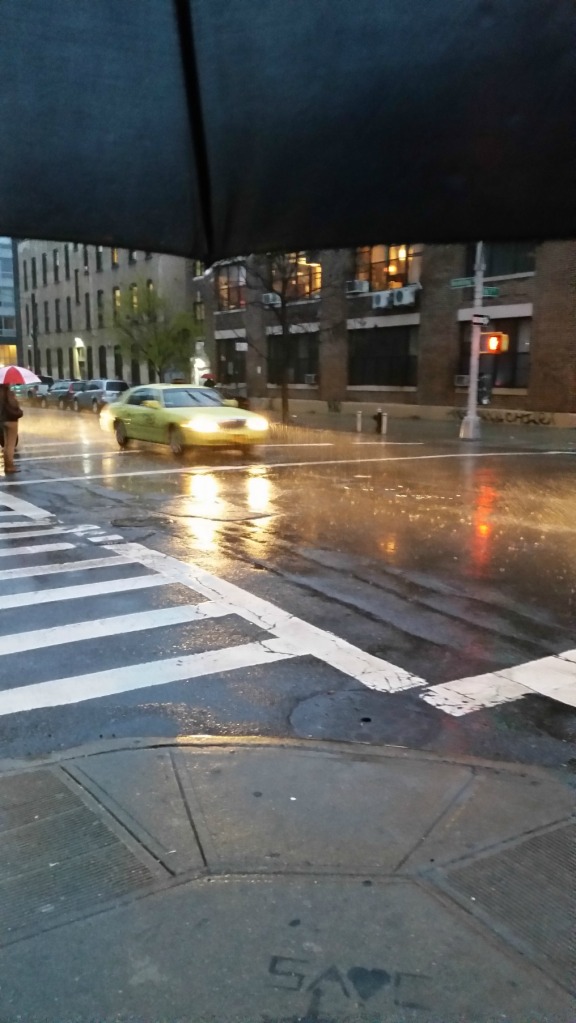 Yesterday was hideous. I even got rained on inside the bus.

All of that water has nowhere to go. To get home, I walked through this puddle (and others). END_OF_DOCUMENT_TOKEN_TO_BE_REPLACED

I approached this weekend with little planned – in a good way! Business travel Monday and Tuesday had left me feeling a bit tired.

Dinner on Friday with my friend Julie popped up as an option. We had a drink at Jane and then dinner at The Dutch. Very fun catching up.

END_OF_DOCUMENT_TOKEN_TO_BE_REPLACED

Although several items on the dessert menu sounded appealing, I had read on Gael Greene‘s blog that tarte tatin was a must-have. She was correct. 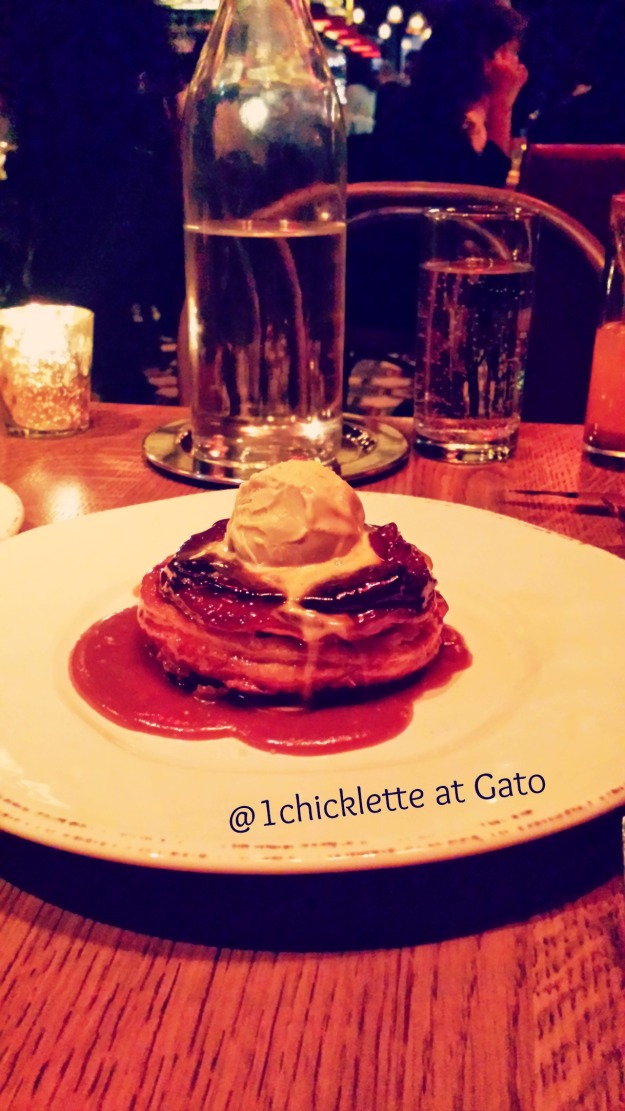 It was great to say hi to Bobby Flay. He seems to be enjoying his newest restaurant.

PS If the day comes when salted caramel goes out of style, I’ll be sad.

As you may recall, I started My NYC To Do List not long after moving back here after ten years in DC. My attention to The List has been, well, haphazard at best.

But I’m focused now. Ready to tackle stuff and add new To Dos.

1. Check out Sleep No More – accomplished!

3. See the Radical Camera exhibit – missed. That will teach me to pick things with realistic deadlines. Maybe.

END_OF_DOCUMENT_TOKEN_TO_BE_REPLACED

1. Rode the Super Bowl Blvd toboggan. It was fun to see Times Square from that vantage point. I wish I’d had time to take more photos. 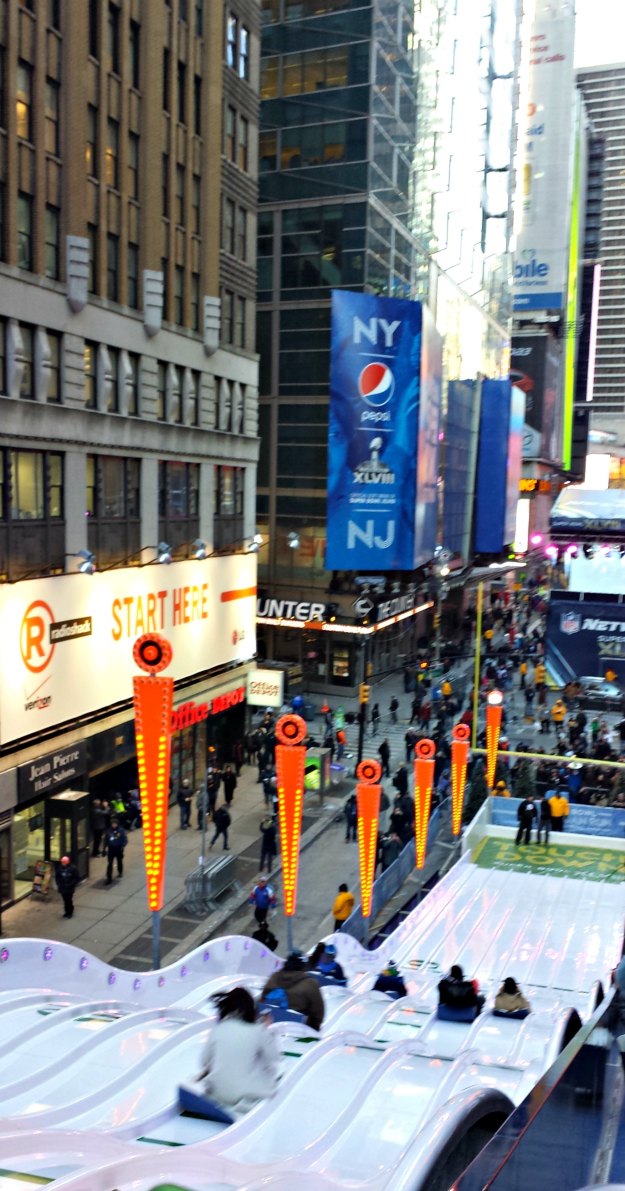 2. Attended an advance movie screening with @misshope. OK, so the movie, Non-Stop, wasn’t good but it was fun to catch up with my friend and we got free popcorn plus a beverage the size of my head! END_OF_DOCUMENT_TOKEN_TO_BE_REPLACED