If you follow me on Twitter, you know that the Starbucks closest to the house where I grew up closes on Thanksgiving and Christmas. It tortures me. Yes, I know I should care about the baristas spending time with their families but…ugh.

On some holidays, I have found that a local Dunkin Donuts is sometimes open. But if you follow me on Twitter, you also know that I think Dunkin’s coffee is a poor substitute for Starbucks or a good independent cafe.* To try to come anywhere close to satisfaction at Dunkin, I order their largest iced latte with an extra shot of espresso and decline all of their ridiculous flavorings.

This year, it occurred to me: why not order tomorrow’s coffee today?

On Christmas Eve, I popped into Starbucks and ordered one latte to drink immediately and one for Christmas morning.

I would exclaim “GENIUS!” but the real exclamation warranted here is “DUH!” because I should have thought of this a long time ago.

If you decide to try this for yourself, here are a few things to keep in mind:

On Christmas morning, I woke up horribly sick (that’s another blog post to come) but at least I had my iced latte. Oh, and PRESENTS.

When I went home to Scranton for Thanksgiving, I learned a hard lesson.

It was late at night and I was lying in the black lacquer bed (like this, but the headboard is round. Seriously.) I picked out when I was twelve or thirteen. I didn’t open Tinder looking for love. Nay, I figured that Tinderers of Scranton would provide fine fodder for Why Did You Put That on Tinder?? 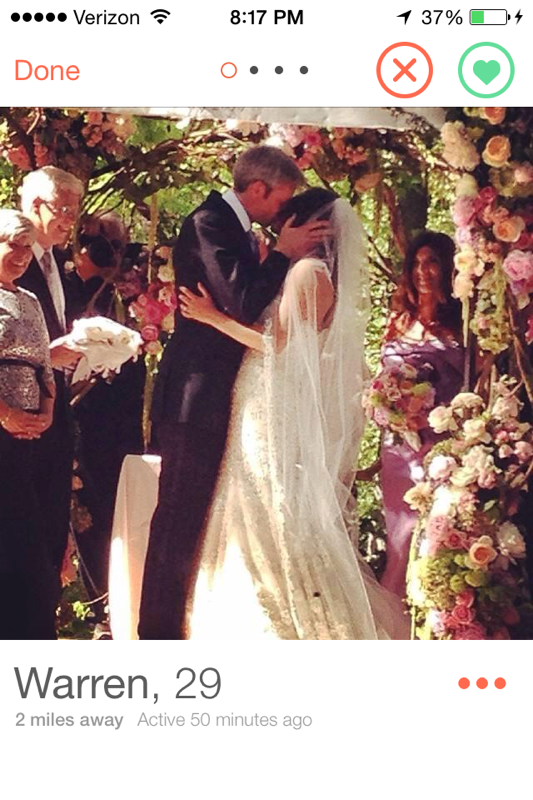 END_OF_DOCUMENT_TOKEN_TO_BE_REPLACED

But I do have a heart and today I’m reminding you what’s in it.

First, Kenya. I think of those beautiful kids I met in July every single day. 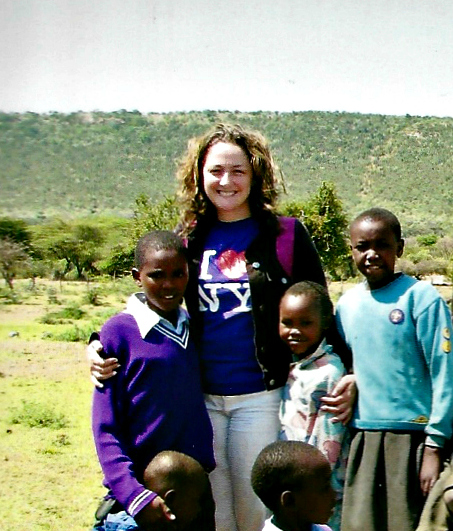 END_OF_DOCUMENT_TOKEN_TO_BE_REPLACED

I was revolted to hear the news that the Inne at the Abingtons refused to book a same-sex couple’s wedding.

Via the Scranton Times-Tribune

Via my hometown newspaper, the Scranton Times-Tribune:

NORTH ABINGTON TWP. — When Pennsylvania’s gay marriage ban was ruled unconstitutional by a federal court, Desiree Mark of Greenfield Twp. abandoned her plans to be married in New York or Connecticut and happily focused on planning a wedding in her home state.

When the 29-year-old sent queries to Scranton area wedding venues requesting an appointment, she learned that marriage equality does not mean equality for gays and lesbians.

“Unfortunately, we do not hold same sex marriages at our facility,” read the email from Courtney Killeen, Wedding & Event Planner for Inne at the Abingtons. “I truly do hope you find somewhere that will fulfill all your wedding dreams.”

Met at the North Abington Twp. venue Thursday, Ms. Killeen confirmed the email was authentic and reflected the policy of the Inne, not her personal belief.

“I don’t agree with it,” she said, adding the owner, John O. Antolick, would be unlikely to comment publicly. Mr. Antolick did not respond to several requests for an interview.

Gays and lesbians gained the legal right to marry in Pennsylvania this year, but can be blocked from reception venues. With no legal protections for LGBT people in Pennsylvania, any business can refuse to serve someone who is, or perceived to be, lesbian, gay, bisexual or transgender.

You can read the rest of the story here.

If there’s a bright spot, it’s that the comments were surprisingly civilized.

I can only hope that we move beyond such ridiculousness sooner rather than later.

Four nights in Scranton is too long.

OK so it was just a light fixture at a NYC restaurant, but didn’t it look like it could beam me up?

I went to my hometown for a few days. There was more snow there than in NYC but not a lot.

My parents and I got along great. Well, so long as we didn’t talk politics or religion. END_OF_DOCUMENT_TOKEN_TO_BE_REPLACED

This weekend, I celebrated being back home in Brooklyn after a few days in my home state of Pennsylvania. These were some of the least restful vacation days, but I got lots of quality time with family.

Did a little prep for Mollytopia‘s upcoming NYC visit. She booked us for a cheese class at Murray’s. I’m so excited!

Had brunch with this handsome fellow Zach (and his wonderful mom) at Spring Natural Kitchen. The banana bread French toast is terrific.

Read half of a book I’m not fond of but can’t seem to give up on and this Apartment Therapy post about living in Los Angeles.

Went to dinner with my friend Amanda at Corkbuzz. We had a wine flight of rosés to acknowledge the coming end of summer. My favorite was the Bisson Portofino Ciliegiolo ’12 (Liguria). The food was hit or miss unfortunately–and pricey.

Caught up with Eliza and her mother Susan, and also met Oscar.

Got a much-needed haircut here and afterward, a much-much-needed passport photo which, while acceptable, I will not be posting anywhere.

Other than the fact that I got my nails done and hate the color, it was a good weekend.

What did you do?

While I was in Philly, my family suffered two losses. Sunday, in particular, was an awful day.

On Monday, once it was clear that my father was doing well post-procedure and would be released the next day, my mother made the trip north to Scranton while I stayed behind to wait for Dad‘s discharge. Her departure ensured that I got to watch The Bachelorette in the hotel.

On Tuesday, Dad was beyond eager to get home. After six days in a narrow hospital bed, being awakened at all hours for checks of his vital signs and numerous needle sticks, who could blame him? Dad desperately wanted to put on his own clothes and escape, but he still had a heart monitor on him and an IV port for medication delivery. While we waited for final orders, I used a lime popsicle to get him to behave and sit still.

Are all men children for life?

When he got sprung from the hospital, we made a break for it.

Together we drove up the Pennsylvania Turnpike in Mom’s Cadillac. Traveling by car with Dad is better than driving with my mother (sorry, Mom). He lets me control the radio and doesn’t criticize my driving.

In fact, he typically falls asleep for approximately 49% of any car trip. It’s only weird when he raises an arm and points zombie-like mid-snooze. Given how much he uses his hands when awake and talking, this should not have surprised me. Dad blames being Polish for that (and lots of other things).

We spent most of the drive tuned into XM-Sirius 90s’ station. Dad didn’t know TLC’s No Scrubs when it came on, but I noticed him tapping his toes to the music and took that as an invitation to give him the history of Chilli, T-Boz and most importantly, Lisa “Left Eye” Lopes, as well as to explain the concept of a ‘scrub.’

Dad is now fully on-board with the fact that women don’t want or need no scrubs. A scrub would get no love from him should I accidentally date one.

Telling Dad that Left Eye was the one who burned down Andre Rison‘s mansion really put the whole story into focus. He seemed appropriately sad when I told him that Left Eye died in a car accident in Central America.

I was about to tell him about T-Boz’s battle with sickle-cell anemia and Chilli’s history with Usher, but then Marky Mark and the Funky Bunch’s Good Vibrations came on and I had to keep up.

Dad had never made the connection between the actor he likes, Mark Wahlberg, and the dude who “sang” with a funky bunch and lifted cinder blocks on a barbell.

I don’t own this image

I didn’t bring up the wonderful Calvin Klein campaign. There are limits to the things I will discuss with my father. I did, however instruct Dad never to call Mr. Wahlberg “Marky Mark” should he ever meet the actor. Can’t have Dad’s handsome face getting punched.

After passing through the Lehigh Valley tunnel, we hit construction-related traffic. Neither of us were bothered. We had great tunes and even better conversation to help us pass the time.

I intend to drive my father around again when I’m back in Scranton in a few weeks. We haven’t yet exhausted the possibilities of 90s on 9, but there’s still the 80s station.

There’s a big event taking place in my hometown on May 4 to commemorate the end of the TV series, The Office.

Some of the series’ biggest names will make the trip including the actors who play Jim and Pam, John Krasinski and Jenna Fischer, and of course Rainn Wilson, the frequent troublemaker Dwight Schrute. 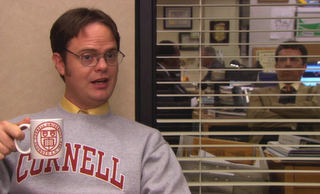 So far there are no signs that Steve Carell, who played Michael Scott through Season 7, will attend.

Andy Bernard aka Ed Helms should make the trip–after all, Scranton is only two hours’ drive from his alma mater and mine, Cornell.

The element I find coolest though is ticket prices: they top out at $21. Isn’t that wonderful? There are also free events including a come one, come all parade. Something for every Office fan.

Maybe I should make the trip!